Many Australians have longed to live outside the city. The treechange and seachange movements – migration from urban areas to rural and coastal towns – have been responsible for much of the population growth outside urban areas in recent years.

Now a newer migration trend is under way: e-change. E-changers are people who move away from the large capital cities to nearby regional and coastal “lifestyle” towns, where they use broadband internet connections to perform work remotely.

A limiting factor for moving to regional areas has always been the lack of high-skill job opportunities. But remote work allows people to have more flexibility in where they live – they can work from anywhere.

Information and communication technology is making this possible for more and more people whose work primarily requires digital connectivity rather than constant physical presence. Email, video conferencing, online project management software and even telepresence robots are all tools that people can use to work remotely outside an office.

Getting away from the rat race

Our large capital cities like Sydney and Melbourne are experiencing significant challenges. As they expand outward and increase in density, traffic congestion is intensifying. Despite significant investment in road construction and public transport, Infrastructure Australia this year reported:

Road congestion is expected to increase in all Australian cities between 2016 and 2031.

Average daily commutes in Australia’s cities are already at all-time highs. The results of long commutes include lower job and life satisfaction.

Commuting in the city is also a public health hazard. This is because the time spent on transport reduces the time we have for other activities. And activities like exercising, socialising or spending time with our families are important for our well-being.

City housing prices are increasingly unaffordable, particularly in well-serviced areas reasonably close to the CBD. Buying a home in suburban Sydney or Melbourne is now out of reach for many young people.

E-changers seek the best of both worlds: doing skilled work that has traditionally been available only in the city, while avoiding the congestion and high cost of city living.

Obviously, not everyone can work away from their place of employment. Some jobs require people to be physically present all or most of the time.

But for many professional or creative workers in today’s digital economy, being productive doesn’t have to mean being in an office in the city every day.

One of Australia’s most successful new companies – software developer Atlassian – is in the midst of a remote working revolution. The tech company Stripe is also forgoing the traditional office by opening a new employment hub that is entirely remote. These companies recognise that valuable employees shouldn’t need to live in Sydney or Melbourne if they can perform their role while living elsewhere.

However, remote workers need not be completely absent from a workplace. Instead of commuting every day, an employee might come into an office once or twice for face-to-face meetings. They can then work the rest of the week remotely at or near their home.

Flexible work arrangements like this mean a higher quality of life for employees. Cities will also benefit from reduced commuting congestion.

It doesn’t have to mean working from home

Co-working spaces are a multibillion-dollar industry globally and are becoming popular in Australia. While mostly still located in cities, co-working spaces are increasingly appearing in smaller coastal and regional towns. This trend indicates a demand from e-changers to work outside the home.

In the US, towns and small cities outside the large metropolitan areas are encouraging people to move to their area. They are offering remote workers subsidised housing, free access to co-working spaces and even paying them thousands of dollars in cash as an incentive. 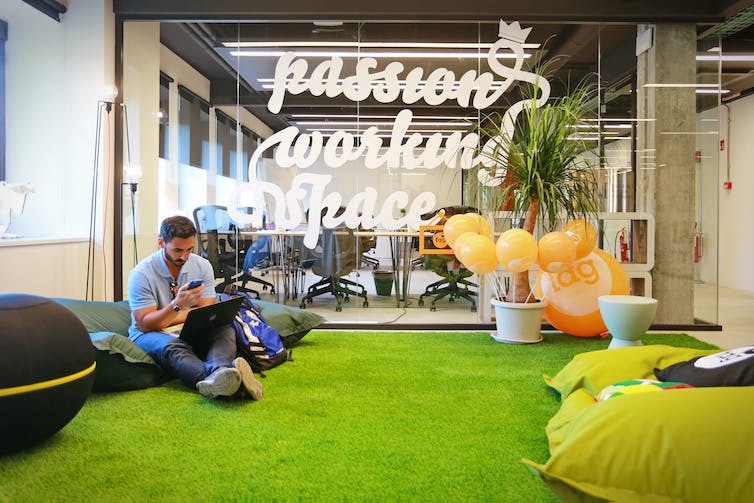 Co-working spaces are booming overseas – this one is in Turin, Italy – with some towns and small cities offering free access to attract remote workers. MikeDotta/Shutterstock

Is e-change the future for Australia?

Reducing the need for people to commute to their place of work every day could be an effective way to ease pressure on our congested city roads and public transport systems.

Remote work allows people to live outside our largest cities, where they’re more likely to be able to buy a home.

As more people adopt an e-change lifestyle, it might help to reinvigorate the economies and civic life of regional and coastal towns.

Making remote work more widely available might also increase workforce participation among groups that aren’t able to commute to an office every day. They include people with caring responsibilities, people with disabilities and those already living in regional areas.

If you think your organisation would benefit from understanding e-change and remote work, the authors would like to hear from you.

Australian city workers’ average commute has blown out to 66 minutes a day. How does yours compare?

Flexible working, the neglected congestion-busting solution for our cities

Co-working spaces are part of the new economy, so town planners better get with the times

The battle to entice children away from their screens and into more active pursuits is a battle being faced by parents across in strata communities across Australia.

Travelling in our own back yards

Australians are already showing a willingness to travel close to home when COVID-19 restrictions are lifted.